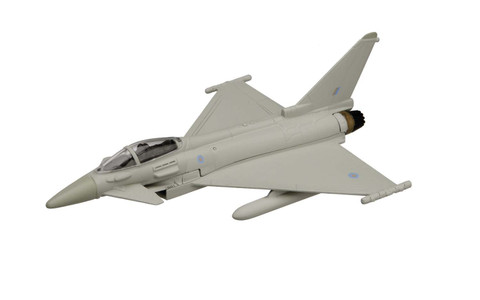 Maintaining the aviation heritage which includes such famous aircraft as the Sopwith Camel and Supermarine Spitfire, the Eurofighter Typhoon is the current air defence fighter of the Royal Air Force and one of the most advanced multi-role aircraft in the world. First entering RAF service in 2006, the agile Typhoon provided the UK with an effective air superiority fighter, one capable of protecting Britain’s airspace against all hostile incursions and possessing the ability to engage in close air to air combat when required. The aircraft has since evolved to include the ability to fly armed reconnaissance and strike missions, making this arguably the most important aircraft in recent Royal Air Force history.

For the RAF student pilot hoping to eventually fly the capable Eurofighter Typhoon, he or she will first have to successfully negotiate a flying training programme which will include time at the controls of such aircraft as the Grob Prefect, Texan T.1 and Hawk T.2, before eventually arriving at either RAF Coningsby or Lossiemouth to realise their dream of becoming a fighter pilot. The final stage of this process would be a seat in a Typhoon T.3 trainer and the potential of securing the most exciting job in the world, that of an RAF fast jet pilot.

Corgi Showcase is a series of top quality die-cast model aircraft suitable for children aged three and over. Each model comes with a display stand and all classic aircraft have a moving propeller. This series is ideal for the young aviation fan and offers a wide range of models to collect including biplanes, fighters, bombers and modern jets. Corgi has been recognised as the market leader in die-cast toys and collectables since 1956 when the brand was launched as 'The ones with Windows'. One of the most famous models created was the James Bond Aston Martin DB5 of which over 10 million have been purchased.The Corgi Toys range of aircraft has been created with the young aviation enthusiast in mind to provide an introduction to all those budding 'air cadets' wanting to start their die-cast collection. A display stand is included.