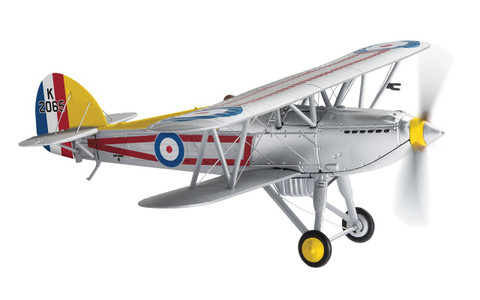 Representing something of a golden era for British aviation, the 1930s saw a rapid expansion of the Royal Air Force and the service introduction of several aircraft types that could claim to be the ultimate biplane fighter. At the head of this group, the beautiful Hawker Fury came at the end of a long line of successful Hawker biplane designs and when it entered RAF service with No.43 Squadron in the summer of 1931, it became the fastest fighter aircraft in their history.

Viewed as a thoroughbred fighter, only the best pilots of the RAF’s elite squadrons were selected to fly the capable Hawker Fury, which was seen to represent the effectiveness and professionalism of the modern Royal Air Force. No.1 Squadron began receiving their Hawker Furys in February 1932 and this early example is presented with the larger pre-1934 roundels and rudder stripes, as well as having the individual flight’s colours painted on the top fuselage decking. As the ‘C’ Flight Commander’s aircraft, it also carries the flight’s yellow colour on the fin, spinner and wheel covers giving this handsome aircraft an even more striking appearance.