In the early 1980s, Pan Am was looking into a new color scheme and decided to experiment with new designs on actual aircraft. One such aircraft was this 727 that received a combination of the old cheatline and enlarged titles on the fuselage. Ultimately, Pan Am in 1984 decided to delete the cheatline entirely, keeping the well-known “billboard” titles. “Clipper Electric” kept this experimental design until at least 1985. ® All related logos, characters, names, and distinctive likenesses there of are the exclusive property of Pan American World Airways, Inc. Used under authorization. 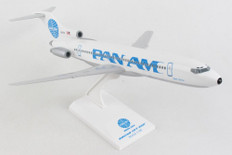